It’s small. It’s stylish… And soon it will be mine: the Ringly.

Fashion meets function. Jewellery meets technology. The Ringly is a ring that connects to a smartphone and alerts wearers about incoming texts or calls via vibration and flashing lights saving us from THAT MOMENT. You know the one. The one where we’re having a blast with friends and then our phone makes a noise and suddenly all we can think about is checking it. Of course I’m not talking about you. You’d never do that. Neither would I… (yes that was sarcasm)

Like many great ideas these days, Ringly began as a Kickstarter project and launched its first batch of rings this past June changing how we view wearable technology. Why the Ringly? That’s easy! Fashion-conscious women don’t want their accessories to look like a piece of plastic/rubber tech equipment. The Ringly however is a piece of jewellery that – even without the gadgetry – is something I believe that most women would choose to wear. Even though it houses accelerometer, Bluetooth LE, a motor and tiny LEDs, it just looks good.

Their next batch is set to ship in early 2015. So if you like it then you should put a Ringly on it. 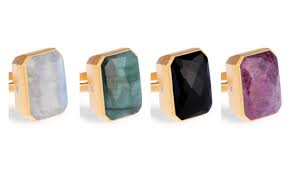